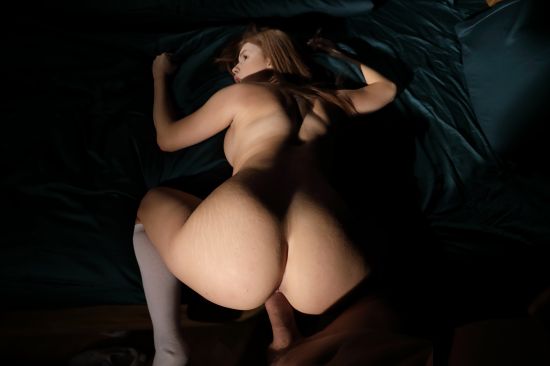 Description :
Katarina Rina is very shy and has trouble making friends. She found a
new VR social media app that put her in contact with other young women
and she quickly developed a friendly relationship with a new girl
Niki. After weeks of conversing, they decided it was time to meet so
Katarina got dressed up cute and headed over to meet her new friend.
When she arrived, she was shocked to find that her new friend was
actually a handsome older man. In this VR porn video, he apologized
for the subterfuge and explained that he too has trouble meeting
people and that everything else he told her was true. He really does
feel close to her. Katarina is scared but also flattered that she
captured the attention of such a handsome and distinguished man. When
she decides to stay, he tells her how beautiful she looks and she
blushes from head to toe. He knows from their conversations that she
is a shy girl and starts to give her gentle but firm commands. His
cock looks huge and she can feel her pussy soaking through her panties
as he slides it into her mouth. This isn't what she was expecting, but
her body responds to his long thrusts as he stretches out her tight
pussy. It feels naughty giving herself to this handsome stranger, but
she does everything he says and loves the way her orgasms sweep over
her body like waves of electric pleasure. Unsure of what to expect she
obeys him when he orders her to put his cock back into her mouth. As
she savours the taste of her own juices, he explodes all over her
tongue. There is so much, she can't swallow fast enough. This is only
the beginning and she already loves it.